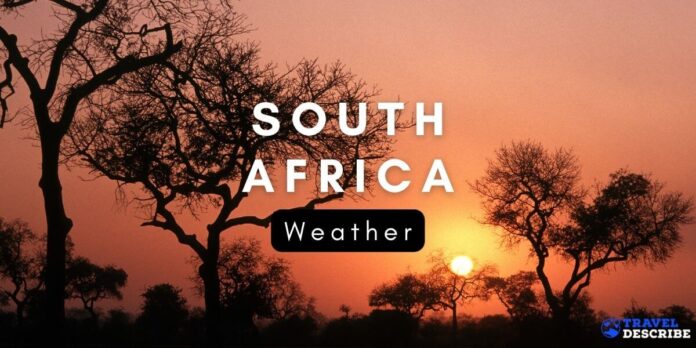 The climate of South Africa is largely influenced by the country’s location between the Indian and Atlantic oceans. This means that the country experiences less variation than other countries in the sub-Saharan African region. However, South Africa is notable for its many hours of sunshine each day. For this reason, it is often considered a paradise for visitors. In addition to the diverse climate in South Africa, the country’s geographical location allows it to experience a wide variety of weather patterns, with milder winters and cooler summers.

The climate of South Africa varies from sub-tropical in the interior plateau to temperate in the northeast. In addition, some areas of the country have a desert climate, making winters in South Africa extremely pleasant. Although the weather is cool in winter, it remains pleasant and sunny. Even the rainy season, from November to March, is generally short-lived. The Western Cape is the exception to this rule.

The climate in Cape Town is warm and temperate. The winter months are much drier than the summer months. According to Koppen and Geiger, the climate of Cape Town is classified as Csb. It averages 16.4 degC and 621 mm (24.4 inches) of rainfall per year. The coldest month is February, while the hottest month is July. The temperatures in the city of Cape Town are between 13 and 23 degrees Celsius.

The coldest day in South Africa was recorded in Bloemfontein, 1353 meters above sea level. This city’s average temperature in 1951 was only 18.8 degrees Celsius. While South Africa’s average temperature from January to March is about 20 degrees Celsius, the coldest place in South Africa is Sutherland, located in the western Roggeveld Mountains. There, temperatures can drop to -15 degrees. During the winter months, most of the country receives its entire amount of rain, including most of Cape Town.

The country experiences typical Southern Hemisphere weather. Temperatures are milder during the winter months than in the summer. Nighttime temperatures in Johannesburg can drop to the freezing point. In contrast, the coastal regions are warmer during summer. In addition to the hotter months, summers are rainy in most of the country. A typical summer day in South Africa can have a temperature of seventy degrees Fahrenheit, while the coasts can be quite hot.

The average rainfall in South Africa is 464 millimeters per year. The western region receives a little more, and the northwest and central regions get the least. The average winter rainfall in South Africa is less than half of that amount. It can be rainy during the winter but is sunny in summer. The temperature in the western parts of the country is more temperate, and it also gets more rain in winter.

There are a number of factors that affect the climate in South Africa. In addition to the prevailing winds, the country’s rainfall varies. In the northwest, rainfall is often less than 200 millimeters, while in the eastern Highveld, it can be 900 millimeters. Occasionally, rainfall in the mountainous regions reaches two thousand millimeters. This makes it ideal for growing crops.

The weather in South Africa can be quite varied, so it’s best to plan your trip accordingly. Generally, the country has a temperate climate, with the high summer months of December and January and the low winter months of March and May. For outdoor activities like hiking, swimming, or horseback riding, the best time to visit is between April and September. Spring weather in South Africa is pleasant for most regions, but travelers should pack lightweight clothing during these months, and bring a light jacket on chilly days. Also, remember to pack sunscreen as the sun in South Africa is extremely harsh all year long.

The best time to visit South Africa is in October and November. During this time, the temperature in Cape Town and the Western Cape can reach 28 degrees. In the southern Cape, the temperature can reach 21 degrees. You’ll find more rain during these months, which makes the country more pleasant. The rainy season is from October to March, so you should plan your trip accordingly. If you’re a hiker, the fall and winter months are the best time to visit the country.

Winter in South Africa is colder than summer, but it’s still warmer than in Europe or North America. The coldest temperatures have been recorded at high altitudes, 250 kilometers northeast of Cape Town. However, the average minimum temperature is only -6.1o C. In 1994, the country had record snowfalls in mountainous areas bordering Lesotho. Aside from that, the weather in South Africa is always changing, and you should plan your vacation accordingly.

The most humid month is July, while the hottest month is January. The third week of the month is the hottest, although the fourth week is the coldest. The maximum temperature is 26 degrees Celsius, but you’ll have to bundle up with warm clothes during this period. During December and January, temperatures are below zero. This means that you’ll have to be extra careful about the type of clothing you’ll need. If you are looking to avoid the rainy season, you should plan your trip accordingly.

March and April are two excellent months to visit South Africa. They are transitional months from summer to autumn, with warm days and cool nights. If you’re looking to avoid the crowded winter months, these months may be perfect for you. The weather in South Africa varies based on the season, altitude, and surrounding weather patterns. However, the warmer months are generally ideal for outdoor activities. It’s best to plan your trip accordingly and check the forecast a few days before you leave.

The summer months in South Africa are generally warm, with a few days of rain, although the coldest months are December and January. While the sun is unforgiving, the summer months are also hot, with temperatures reaching 25 degrees Celsius in the Western Cape. During these months, many people are prone to flash floods. Furthermore, electrical storms occur regularly in the country, especially in the east and the Highveld. Lightning is responsible for many deaths in South Africa each year.

Winter in South Africa is generally cool and dry. While the summer months are overwhelmingly hot and humid, they are relatively dry in most regions of the country. During the summer months, there are frequent afternoon thunderstorms and rains. Depending on the latitude, the winter months may be cold and damp. In winter, the weather is temperate, though. The temperature varies greatly, and rainfall varies from region to region. If you plan your trip accordingly, you can expect temperatures to fluctuate from freezing to scorching.

The rainfall in South Africa varies wildly depending on the region. The northern and western parts of the country receive less than 200 millimeters of rain per year, while the eastern Highveld gets around 500 millimeters of rain. Sometimes, they even surpass two thousand millimeters. During the winter, the interior temperatures of South Africa fluctuate wildly, depending on the weather conditions. While winters can be hot and humid, the winters can be mild, although it may be windy.

The rainy seasons of the country are best during the summer. The area in Gauteng has real, larger-than-life thunderstorms, which make it an ideal destination for photographers. Many visitors also enjoy hiking, camping, or sightseeing in Cape Town and the Cango Caves in the Karoo. Moreover, Cape Town has many museums, theatres, and shopping options for tourists. It is best to pack a jacket and an umbrella when visiting the city.

Visit South Africa When is the Best Time to...
China